skip to main | skip to sidebar

BEST ARTWORK Posted on a BLOG in 2007

…and finally The MAMA Award for best picture.....


I'm pleased to announce that the winner of The MAMA Award for Best Picture, with 33 votes, is Carol Carter (Carol Carter) with Up from the Abyss (see below).
"Up from the Abyss" by Carol Carter (Carol Carter and Hot News)40x30, watercolour
I like this watercolour because it's unusual (despite it being one of many in her 'swimmers' series). It's big (30x40 inches), it's wet (just look at the wet work in the shadows), it's masterful with technique (done from a photograph I imagine but doesn't look photorealist), it doesn't give up it's meaning at the first glance (brave to demand this on the web with the average surfer judging a painting in less than ten seconds), it's curious (the psychological shedding of an oldself or second skin in times of difficulties....), it's hopeful (the new taking form), it's pretty (love those colours!), it's hip...
nominated by Adam Cope (Dordogne Painting Days)Carol Carter received her MFA from Washington University, St. Louis. She received a MAA-NEA Fellowship in Painting and Works on Paper in 1994. Since that date she has received quite a few other prizes for her painting as her website biography indicates.
painting for 30 years....... raised a son.... own my own studio..... football/CHIEFS fan... love to bike... and make a living as an artist....Carol Carter - blog profileHer handling of watercolour is masterful as is the composition of this painting. You can see more of her watercolour swimmer nudes for a series completed in 2006 and 2007 on her website (which I only discovered this morning - along with her other blog Hot News). Other subjects are extremely exciting landscapes and botanicals and a recent series of paintings of people. It's good to see that Carol also regularly delivers watercolour workshops (as you can see from this list) and you can see what the one held in April 2007 was like on a 'blog'-like account on her website.Carol only started to blog in August 2007! I'm sure many of us would like to encourage Carol to show us more of her work on her blog in 2008 and I'm leaving a message to this effect on the blog post which relates to this painting. Feel free to do the same!

Thank you for this honor~!
Posted by Carol Carter at 8:59 AM No comments: 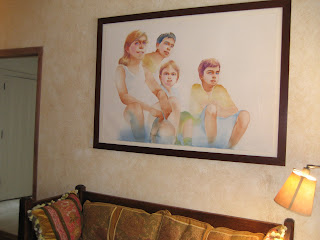 This large scale watercolor of 4 children was painted in 2000. The paper measures 40 x 60. It was complex to paint, as I was concerned about capturing all the likenesses correctly on one panel.

Posted by Carol Carter at 6:12 PM No comments:

Get the paintings emailed to you as they post. Email: